A Look Back in Time: Rose School, Cypress Inn, TN

In this week’s feature “A Look Back in Time,” we have two very different photos of the Rose School in Cypress Inn, TN, taken about 80 years apart. The old school building, which is still standing today on the farm belonging to Nick and Tonya Thompson on Piney Road, appears to be perhaps a barn at first glance. However, a closer look reveals the structure that was a school attended by many children in the Cypress Inn area in the last century.

The older photo, taken circa 1941, shows a group of school children and their teacher gathered outside the school on what must have been a very warm day, based on the large windows of the school being raised to allow air into the building. Air conditioning was a luxury that most people hadn’t even heard of in 1941, much less had in their homes and schools. School children today truly don’t realize the advantages of modern times, such as central heat and air, indoor plumbing, an in-school cafeteria, and other things that are taken for granted.

The time-weathered but still beautiful Rose School is just one of many buildings still standing in Wayne County that were built and occupied in another era, another century, another time indeed. This writer is just one of many Wayne Countians who hold dear these old institutions that still contain so much history of our ancestors. 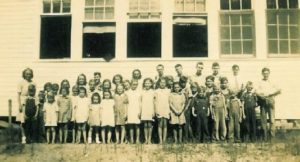 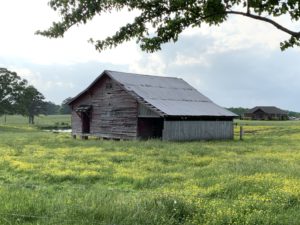 The photo above of the Rose School was taken in May 2022. The old institution is still standing on Nick and Tonya Thompson’s farm in Cypress Inn.