U.S. Senator Marsha Blackburn made a stop in Wayne County last week as part of her 95-county “check-in.” Following her meeting with Wayne County Executive Jim Mangubat, the Wayne County News was given the opportunity to ask the senator about her views and opinions on some of the major talking points in our country right now.

WCN: Great to see you today, Senator Blackburn. The first thing I would like to ask you about is what seems to be the main topic on everyone’s mind right now – the economy. Do you see anything headed in a positive direction when it comes to fuel and food prices?

Blackburn: “Inflation affects every single person. Not only the price at the pump, the price at the grocery store, but also the county budget, the city budget, the price of fuel for EMS and school buses. All of these budgets are impacted by inflation. I wish I could say that I see something positive about the direction of the economy, but until we see the Keystone pipeline restarted, go back to drilling in Alaska, fracking, and give more drill permits for leases, you’re not going to see a change. Joe Biden said when he was running for office that he intended to end the oil and gas industry in the U.S. and he is trying to make good on that promise.”

WCN: Another topic on everyone’s mind is the overturning of Roe v. Wade. How do you think this affects Tennesseans and Wayne Countians in particular?

Blackburn: “The court decision was to follow the Constitution, and that is what they did. They said that this is not an issue for the federal government, it is an issue for the various and separate states, and that restrictions and regulations on abortions are to be handled by the states. So the issue now goes to the states, and I think everyone is looking forward to seeing how the different states are going to exercise their rights and put in place abortion restrictions and regulations that people in those states want to see. I think there’s been a lot of conversation out there that this would be a federal ban on abortion. This is not a ban on abortion, it is simply saying that the entity responsible for regulating is the states. I was very pleased to see this sent back to the states, and I think it was a true victory of pro-life advocates. Wayne County has a lot of pro-life advocates, and they are to be commended for the hard work they’ve done for many years to promote the culture of life.”

WCN: We’ve all taken notice of the mass shootings and school shootings that seem to pop up in the news cycle every few weeks, sometimes multiple ones on the same day. How do you feel about gun control laws, and their possible impact on these mass shootings?

Blackburn: “First, I have advocated for several years that when you have a juvenile that has a felony criminal conviction, meaning they were tried as an adult and convicted as an adult, that needs to be a part of their record and not expunged when they turn 18. Law enforcement needs to be aware in their dealings with people if they have a felony criminal conviction. The bill that was brought before Congress had some good aspects on dealing with these issues with juveniles and dealing with mental health, but the ones pushing the bill tried to tie it to the expansion of some red flag laws. The way the bill was written, it would basically end up being a mandate. If you were going to get federal money, you were going to have to apply these red flag laws. Interestingly enough, the group that voiced their resistance most to this was our veterans. In some states, PTSD is classified as a mental illness, and this has the potential for blocking some of our veterans from being able to own firearms. Something I’ve supported for months is taking money that is left in our elementary/secondary school funding and using it to harden schools so we know our children are safe. Every school should have one point of entry. Let’s put in a provision that will allow retired law enforcement and retired military, people who have training in how to use a weapon and de-escalation training, to be deputized by your local sheriff. Let them take a shift at a local school to protect that school. That saves the county money, keeps the kids safe, and gives some grandparents the opportunity to get involved. We have heard from many who said ‘sign me up.’ These are common sense solutions, and you will not find me voting for something that is going to infringe on a law-abiding citizen’s second amendment rights.” 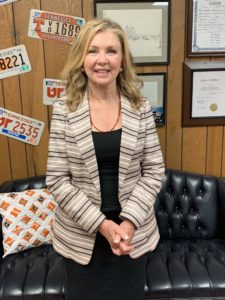